We are particularly pleased that our partner Ulrike Schweibert has been repeatedly recognised as a leading name in employment law:

A big thank you to our clients and the entire team!

In the JUVE Handbook of Commercial Law Firms 2021/22, newly published on 01.11.2021, SCHWEIBERT LESSMANN has further advanced into the category 2 of the labour law firms recommended throughout Germany. The JUVE Handbook counts four of our lawyers among the leading employment lawyers in Germany.

Together with Kirkland & Ellis, SCHWEIBERT LESSMANN advises Yucaipa Acquisition Corporation on the listing of Signa Sports

SCHWEIBERT LESSMANN featured again in Who’s Who Legal in 2021

We are particularly pleased that our partner Ulrike Schweibert has been repeatedly recognised as a leading name in employment law:

A big thank you to our clients and the entire team!

In the JUVE Handbook of Commercial Law Firms 2010/21, newly published on 30.10.2020, SCHWEIBERT LESSMANN has further advanced into the category 3 of the labour law firms recommended throughout Germany. The JUVE Handbook counts four of our partners among the leading employment lawyers in Germany.

FOCUS survey again lists SCHWEIBERT LESSMANN among the leading law firms for employment law in Germany for 2020. The results of FOCUS’ annual survey are presented in a special edition of the magazine which lists the TOP Business Law Lawyers in different categories. 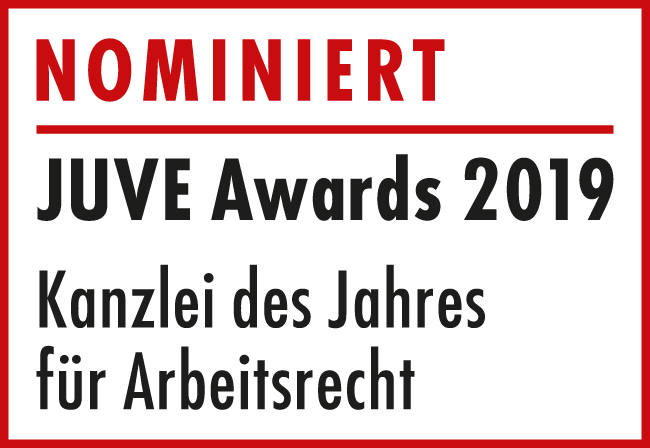 In the publication of the Handelsblatt on 1 July 2019,  Dr. Ulrike Schweibert was additionally mentioned separately as “Lawyer of the Year” for 2019 as an employment lawyer with the highest recognition amongst her peers and clients.

The tire manufacturer Continental has signed a sale and purchase agreement in respect of the acquisition of the car tires and car repair shop-chain Reifen John, which will close after the respective antitrust-clearances are obtained, expected in Q1 of 2019. Dr. Rüdiger Hopfe had previously advised the Continental-subsidiary Vergölst in 2015 in the acquisition of the Eska tire services trade chain.

SCHWEIBERT LESSMANN advises C.H. Guenther & Son in employment law matters in its acquisition of Wback together with Kirkland

The PE company Pritzker Private Capital Partners which had acquired Guenther & Son, a specialist for hamburger buns with its seat in Texas only in March 2018 has now acquired the German hotdog and hamburger bun specialist producer Wback from its current investment company Halder.

Dr. Jochen Leßmann and Dr. Christoph Herrmann were once again invited as speakers to the yearly conference of inhouse lawyers in Berlin on employment law related topics. This year’s speech addressed the subject matter of fictitious self-employment based on current developments in applicable law and relevant court cases, namely the highly practical and relevant question regarding the distinction between employment and self-employment in the light of modern ways of deployment of external staff in companies alongside the company’s own employees.

In its new edition of the JUVE-handbook, SCHWEIBERT LESSMANN was ranked in the 3rd category (out of 7) of Germany wide recommended law firms specialised in labour and employment law. As in previous years, three of its partners were individually listed as leading experts in their respective seniority group. Dr. Ulrike Schweibert, Nicole Engesser Means, Dr. Rüdiger Hopfe as well as Dr. Jochen Leßmann are mentioned as regularly recommended for their outstanding legal competence as well as tactical advice.

SCHWEIBERT LESSMANN will expand to Berlin with new partner Prof. Dr. Anja Mengel, one of the most renowned labour and employment lawyers in Germany. Mengel has been advising and representing for almost 20 years and in all areas of labour and employment law as well as related compliance matters both German and international clients across Germany, from DAX-30 to start-ups with a focus on the service industry sector. She also regularly represents clients in high profile litigation cases up to the Federal Labour Court.

Dr. Jochen Leßmann, who has previously worked in the Berlin office of Freshfields for almost 15 years, will assist Mengel in the establishment of the Berlin office and expects to be present there regularly. The move of Mengel is in line with the strategy pursued by SCHWEIBERT LESSMANN of building and expanding its office renowned for excellence and top service with first-rate specialists, as was already the case when well-known employment partner Nicole Engesser Means joined the partnership from Clifford Chance in 2015.

As of 1 December 2018, Dr. Simone Kühnast has joined the Berlin office as Counsel. Kühnast has previously worked for many years in the employment law division of a large German DAX company’s employers association, then as Head of Division in the employment, codetermination and social relationship division of the same DAX company. Prior to joining SCHWEIBERT LESSMANN, Kühnast was employed as a certified specialist for employment and labor law in a commercial law firm in Berlin.

On 23 June 2018 Best Lawyers in cooperation with Handelsblatt published the 9th ranking with the names and law firms of the best lawyers in 2017 according to specialisation and region in „Deutschlands Beste Anwälte“. Listing in the ranking is based solely on peer-reviews and clients recommendations in order to determine the best individuals and firms in their respective fields. With Nicole Engesser Means, Dr. Jochen Leßmann, Dr. Rüdiger Hopfe as well as Dr. Ulrike Schweibert, all four partners of SCHWEIBERT LESSMANN were once again ranked. This ranking confirms SCHWEIBERT LESSMANN’s professional competence in the field of labour and employment law as well as the high esteem our partners enjoy in the legal community.

SCHWEIBERT LESSMANN featured again in Who’s Who Legal in 2018

With partners Nicole Engesser Means, Dr. Jochen Leßmann and Dr. Ulrike Schweibert of the Frankfurt office and Prof. Dr. Anja Mengel who joined the partnership in January 2019 in the newly established Berlin office, SCHWEIBERT LESSMANN featured once again as law firm with prominent experts for labour, employment as well as benefits law in 2018.

Just in time for our 5th anniversary we take the next step and move to bigger offices on the 5th floor of the Emporium in Mendelssohnstraße 87, 60325 Frankfurt. The building is located centrally at the corner of Bockheimer Landstraße and next to the underground station Westend. For our visitors we can offer parking spaces in the garage.

Apart from our change of location everything else remains the same: Telephone numbers, emailaddresses and our team.

With a total value of approximately EUR 5.3 billion, the takeover is likely to be the largest private equity transaction ever realized in the German market.

Together with Kirkland & Ellis Schweibert Leßmann has advised Creat Group Corporation, a Chinese investment group focused on long-term strategic investments in healthcare and pharma as well as manufacturing, energy, finance, natural resources and real estate, on the public takeover of Biotest AG, a supplier of plasma protein products and biotherapeutic drugs headquartered in Germany.

Tiancheng (Germany) Pharmaceutical Holdings AG, a subsidiary of Creat Group Corporation, announced today that it will enter into a business combination agreement with Biotest AG and plans a voluntary public takeover offer at a price of €28.50 per ordinary share and €19.00 per preference share.

The €940 million transaction is one of the largest investments by a Chinese company in the Western health sector.

We are pleased that WirtschaftsWoche lists Schweibert Leßmann & Partner as one of the 27 leading law firms for employment law, in particular naming our partner Dr. Ulrike Schweibert (Issue 7, 10 Feb 2017).

On behalf of WirtschaftsWoche the Handelsblatt Research Institut determined a short list based on recommendations by colleagues. In a second step a commission of experts from inhouse lawyers, academics and representatives of business associations established the final ranking.

JUVE has nominated Schweibert Leßmann & Partner for “Employment Law Firm of the Year” award as well as for the Founder’s award.

JUVE has nominated Schweibert Leßmann & Partner for this years “Employment Law Firm of the Year” award as well as for the Founder’s award.

The leading branch magazine for business lawyers JUVE every year honors law firms and in-house teams with the JUVE Awards whose work and market position attract attention. The decision is based on information resulting from the research for the JUVE Handbook Business Law Firms. The selection of the winners is in particularly based on legal expertise, business strategy and future potential.

The winners will be announced on 29 October 2015 at a gala in the Alte Oper Frankfurt.

Further information (in German) is available under http://www.juve.de/awards.

FOCUS survey again lists Schweibert Leßmann & Partner among the leading law firms for employment law in Germany. The results of FOCUS’ annual survey are presented in a special edition of the magazine which lists the TOP Business Law Lawyers in different categories.

On behalf of Focus Magazin Verlag, the Research Institute Statista in Hamburg determined the list based on recommendations from colleagues in other law firms as well as from inhouse lawyers.